Well, it’s been a while since I’ve posted – life’s kind of got in the way.

I completed Solar Flare on the 1st January:

So, then I started Tony Minieri’s Stars For A New Millenium, my own colourway:

And then, in order to attempt to bring some semblance of finishing to my WIP pile, I got out Tiger Reflection.  This is how it looked when I picked it up: 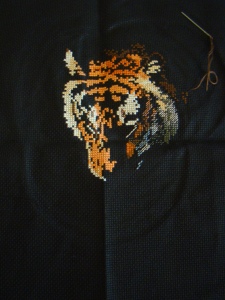 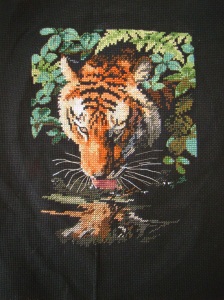 I also picked up this little bookmark, a cover kit from one of the UK magazines, and stitched it for my Mum for Mother’s Day, started 17-Feb-2013, finished 2-Mar-2013.

I’m finding that Euphoria is now yelling at me to pick her up again, so here’s how she stands at the moment:

I’m onto page 5, so only another 65 to go!  Unfortunately, it’ll be at least another 10 pages until I’m out of background and into the lady herself.  Boo. :o(  I suppose at least it’s good that I want to work on a WIP, rather than start something new.

I’ll try not to be so tardy in reporting in future, but we’ll see.

Well, very late with TUSAL, and a bit late for WIPocalypse.

Mostly, it’s blue and grey, because I’ve been working on The Dark Knight.  Progress is good:

That’s the first page complete, and the second started, although I found the frogs visited me last night, due to careless (read – no) counting, and I shall have to take out everything to the right of the completed page. I enlarged the chart from 6 pages to 9, and I didn’t do them all the same size, apparently.  Duh!

I’m not sure it really counts as WIP work, but I just finished cleaning up a Mirabilia that I did in 1995. It had been hanging in an unheated room, with early morning sun shining on it, and the glass had got condensation on it inside the frame. So I took it out, cleaned the glass thoroughly, and re-sealed it with framing tape.  Fortunately the stitching was untouched by the moisture, so all is well. 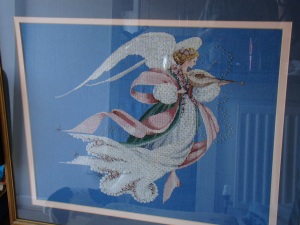 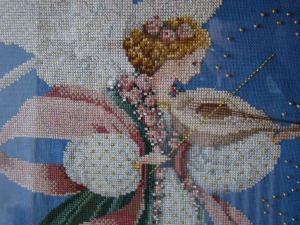 I got some new framing done, too.

We saw a lot of bison while we were in Yellowstone Park last year, and I picked this up in one of the Lodges, along with a stitch of Old Faithful, which I haven’t started yet.

This is a Christmas freebie from Mirabilia, which has been waiting to be framed since 2000. She’ll only come out for Christmas, but she’s very pretty.

These are ‘Lady in Red’ and ‘The Blues’ by Valerie Pfeiffer from Heritage Crafts.  I have a third in the series, a hummingbird, but haven’t started it yet.  I love these, they’re so cute.

‘A Gracious Era’ is finally framed.  Again, it’ll only come out for Christmas, but it looks good, and I’m so pleased it’s done. 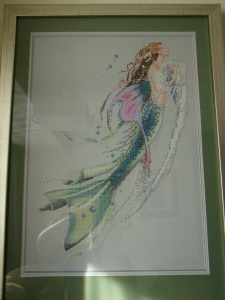 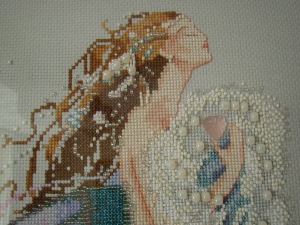 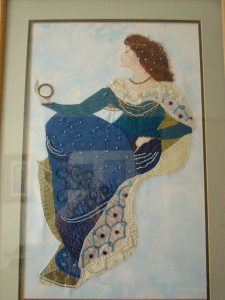 Again, not strictly speaking WIP work, but we moved these two around and re-hung them in the living room.  ‘Mermaid of the Pearls’ by Mirabilia, and an appliqued and freehand embroidered piece based on one of the Mirabilia ‘Queen’ series.

No progress on the World Map, or on the Tiger, to report, but I’m pleased.  I’ve got quite a lot done.  I probably could have done more, but I’ve been playing Final Fantasy XIII-2 on the Playstation quite a lot lately.

It’s Miniatura next weekend, so I expect I’ll see some progress on some other WIPs while I’m there.

Well, first of all, I finally framed Tallulah: 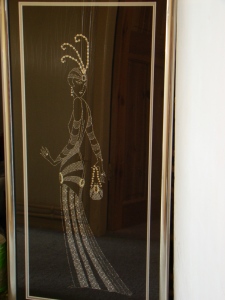 She’s rather difficult to photograph, because of being on black fabric, but you get the idea.  I’m pleased with her.  I have a load more framing ready to go, but I find I get bored very quickly of mounting.

The World Map has made some progress.

and as of last night:

But I got bored amazingly quickly with the blackwork ships, so I picked up a sparkly Angel Wreath, which now just needs beads and finishing:

Yeah, I know, it’s not on the WIPocalypse list, but hey, it’s sparkly!

Tiger Reflection has seen a little bit of work:

and as of today:

This came yesterday, and yes, I know, I’ve already got WAAAY too much stash:

This is a canvaswork piece called Solar Flare, by Ro Pace.  It’s got all sorts of interesting speciality stitches, and having read the instructions, it’s going to be a challenge!  I think it will work better on a dark background, though, so I’ll be changing the canvas colour.

I’ve also got a piece of specially dyed linen on the way, from www.countrystitch.com in New Zealand, for this:

It’s a really cool chart, but it calls for SIX AND A HALF skeins of colour to stitch the background!  I just know that it’ll become a UFO (UnFinished Object) if I have to do that, so the lovely Catherine has dyed me some linen to match the thread colour.  I’ll be dropping everything to start that when it arrives, so let’s hope I finish the map first!

And I’ll be staying in a lot to stitch – it’s so cold!  Not Canada cold, I’ll grant you (it’s around -3 overnight), but we’ve had our first major dropping of snow: 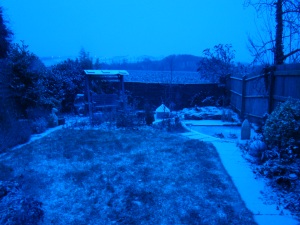 This was it just starting on Saturday night, and we woke up on Sunday to about 3 – 4 inches.  Again, nothing major compared to other places, but hey, this is the UK, we can’t cope!  And another big snowfall is predicted for Friday, I gather, so there’ll be lots of staying in.

Well, been a looooong time since I posted!  I’ve moved over here from www.emmadragon.multiply.com, so if you want to see my older posts, that’s the place to go.

Measi’s WIPocalypse http://measi.net/measiblog/2012-wipocalypse/ has pushed me to come back to blogging and have another go.

Woke up this morning to the first snow of this year: 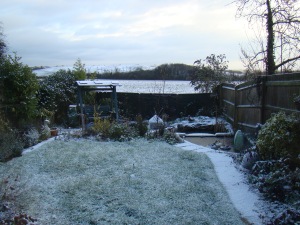 Max still hasn’t figured out what this cold, wet, white stuff is.

In sewing news, I finally finished Tuscany Town mandala a couple of weeks ago:

I also finished Bird of God on Friday night – will post a picture once it’s framed.

I inventoried my stash yesterday – boy, there is way too much stuff there!  I have definitely achieved SABLE (Stash Acquired Beyond Life Expectancy).

And getting started early on the WIPocalypse, I’ve returned to ‘Tallulah’, which is very nearly finished.  Just a bit of filling in left to do, but it’s a bit of a pig to work on, because it’s on black.  She’s also very dusty, because she’s been sitting in a corner for probably two years, but hopefully that’ll come out in the wash when she’s done.